This site will not work correctly when cookies are disabled.

Gut Health and Exercise – What Do Athletes Need to Know?

Have you ever suffered from stomach cramps and bloating during a long run? The chances are you may have done, with gastrointestinal (GI) symptoms commonly reported in endurance athletes taking part in marathon, cycling, triathlon and ultra endurance events, reportedly affecting up to 90% of elite endurance athletes. A recent study in recreational marathon runners found that 25% of them experienced moderate GI symptoms. It’s not just found in endurance sports either, with athletes taking part in predominantly anaerobic sports like weightlifting also reporting gut symptoms. For athletes who experience GI symptoms at rest, these can also be made worse by exercise. However, for non-athletic populations, the opposite has also been found to be true; with moderate-exercise improving symptoms.

What are Gastrointestinal Symptoms?

Gl symptoms can be classed as either upper-gastrointestinal (nausea, vomiting, upper abdominal bloating, belching, chest pain and heartburn) or lower-gastro-intestinal (flatulence, urge to defecate, lower abdominal pain or cramping, loose stools, diarrhoea and faecal blood loss). The frequency and severity of these symptoms can vary from occasional, mild discomfort to being very frequent and/or painful or unpleasant for the athlete in question. Most exercise-induced GI symptoms appear to cause no risks to health, with the effects being short-lived in healthy individuals. However, these symptoms can be disruptive in the short-term, impairing or limiting performance, with some athletes abandoning races, particularly when vomiting or diarrhoea are experienced. 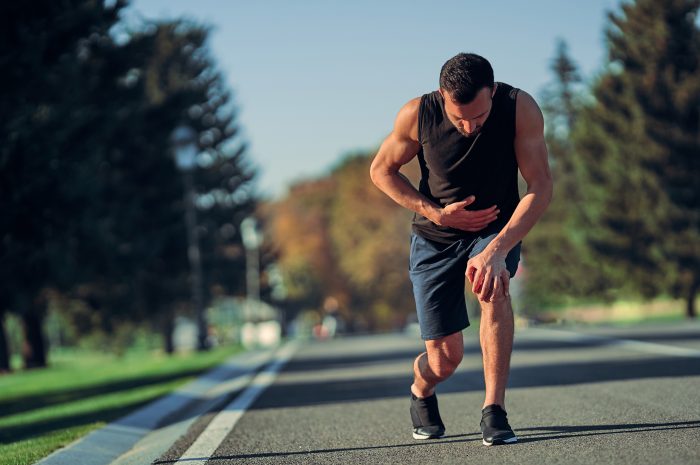 What Can Cause Negative GI Symptoms in Athletes?

There are three main mechanisms suggested to cause or affect GI symptoms in athletes; physiological, mechanical and nutritional. The redirection of blood flow away from the digestive system and towards the working muscles, particularly during high-intensity or prolonged exercise, is thought to be the largest contributing factor. In addition to the intensity and duration of exercise, the type of exercise itself can make GI symptoms worse. Symptoms appear to be less frequent in sports where the body is in a relatively stable or supported position such as cycling or swimming, with symptoms being more common in runners than cyclists. The repetitive, up and down bouncing or jostling movement of running is thought to contribute to the more frequent reporting of symptoms in runners.

The reduction in intestinal blood flow can slow down the transit of food, causing GI symptoms, and may in some cases lead to damage to the lining of your gut. The other factors which influence the extent of GI symptoms appear to be if long-duration exercise is performed in the heat and whether you are dehydrated. It’s possible that some individuals are predisposed to experiencing more GI symptoms than others. Non-steroidal anti-inflammatory drugs (NSAIDs) such as aspirin and ibuprofen are known to be gastrointestinal irritants and use of them before exercise has been linked to gastric and intestinal permeability.

What Can Improve Negative GI Symptoms?

There are several nutritional interventions which have been proposed to reduce or prevent the negative effects of GI symptoms, particularly when experienced during exercising in the heat. They include consuming fluids, carbohydrates, amino acids, polyphenols, anti-oxidants and probiotics. The use of adequate hydration and appropriate carbohydrate intake have been researched the most and show the most promise.

Dehydration through a combination of exercise and thermal stress is thought to increase the occurrence of GI symptoms. However, an accumulation of unabsorbed fluid in the stomach and over-hydration can also result in GI symptoms. The concentration and type of carbohydrate consumed influences GI symptoms. High intakes of single source carbohydrates, particularly in fluid form, can increase nausea and flatulence as a result of the fluid accumulating and incomplete absorption. Intolerance to carbohydrate feeding depends on the volume; the higher the intake increasing the likelihood of symptoms. The combination of the total energy and concentration of the carbohydrates influences the rate of gastric emptying and appears to influence the incidence of GI symptoms. Unaccustomed intakes of fluid and food during exercise can double the risk of developing GI symptoms when compared to intakes that have been practised, so make sure you include “training your gut” in your nutrition plan.

Probiotics are live micro-organisms, bacteria and yeasts, which grant a health benefit and are often added to dairy products like yoghurts, other fermented products and dietary supplements. Often described as “good” or “friendly” bacteria, they are thought to restore the healthy balance of bacteria in our gut after illness or increase gut microbiome diversity. The body of probiotic research is expanding rapidly, however research into GI benefits in athletes varies considerably in the methods employed, not least the sport itself and the probiotic strain and dose used. Studies in swimmers and rugby players have reported no significant reduction in GI symptoms when supplementing with probiotics. Whereas, in marathon runners and triathletes, supplementation with probiotics have been found to reduce the severity and incidence of GI symptoms. These positive effects are potentially a result of an improved absorption of carbohydrates in the intestines.

How can I reduce the chances of experiencing negative GI symptoms?

Vicky is a Registered Performance Nutritionist (SENr) currently working for Championship football club Birmingham City FC and AFC Wimbledon (League One). She has an MSc in Sport and Exercise Nutrition from the University of Westminster and is a Visiting Lecturer on the University of Roehampton’s MSc Sport and Exercise Nutrition. Vicky is also a UK Anti-Doping Advisor and ISAK Level 1 Technician. Vicky runs her own private nutrition consultancy where...

We’re proud to work as official nutrition suppliers to a wide range of top-level clubs across the UK and further afield. Interested in what we could do for your club?

Sign up to our newsletter to be the first to know about our exciting offers, events and new products, plus an exclusive 10% off welcome discount!